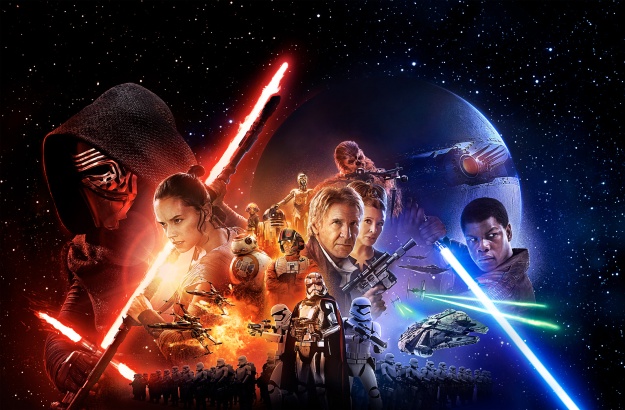 For decades it seemed like a fantasy, a new movie continuing the adventures of the characters audiences had come to know and love from the Star Wars Trilogy. That most glorious of triptychs formed by A New Hope (1977), The Empire Strikes Back (1980) and Return of the Jedi (1983). Even when creator George Lucas announced in the 90’s he would be releasing a new trilogy it was to be a series of prequels setting up the events of the three classics.

Before looking at the new movie lets take a look at the where Star Wars stood in the public consciousness. The prequel movies, The Phantom Menace (1999), Attack of the Clones (2002) and Revenge of the Sith (2005) had been met with a mixed response from fans and critics. While few would argue their innovations when it came to effects or that they contained moments of genuine greatness (Sith’s outstanding moment ‘You were my brother Anakin, I loved you’ is superb) Lucas got lost amongst the technology and the films suffered from poor direction, actors lost amongst effects, weak scripts and an artificial feeling generated from an insistence on shooting digitally against the majority of the time green and blue screens with backgrounds added after. Revenge of the Sith was the strongest of the three and bought back some of the goodwill but as 2005 drew to a close for all intents and purposes Star Wars on the big screen was over.

On the small screen things looked brighter with the CG (computer generated) animated series The Clone Wars providing some wonderfully complex story telling and character development. Yet still audiences were hankering for the magic of those original three films. And then in 2012 reports emerged in the media that shook fans to their core, George Lucas announced the sale of his company Lucasfilm and all its series such as Star Wars and Indiana Jones to Disney.

The House of Mouse had several years before acquired Marvel Comics and was responsible for the juggernaut that became the Marvel Cinematic Universe which by the end of 2015 had released twelve movies that all linked into each other and been huge success’ at the box office. Cinema audiences were ready, prepared to expect story lines told across multiple movies and as the sale of Lucasfilm was announced Disney announced that the work had begun on Star Wars Episode VII for release at Christmas 2015.

Fans clamored for information, who would be back? Who would direct? Would the effects dominate and the story line suffer? Director JJ Abrams (hot off directing the revitalized Star Trek franchise two big screen outings) was hired and alongside writers Lawrence Kasdan (The Empire Strikes Back, Return of the Jedi, Raiders of the Lost Ark) and Michael Arndt (Toy Story 3, Brave) would shape the script of what may prove to be one of the most popular films of all time.

As the trailers emerged fans got a glimpse of what this new era of Star Wars was going to offer them. Landscapes showing the after effects of conflict in a galaxy far, far away with Star Destroyers and X-Wings half buried in the ground but still soaring high the Millennium Falcon perhaps the most iconic spaceship ever designed. In a moment to send shivers down the spine of any long time fan a voice emerges from the darkness and then the camera cuts to Han Solo and Chewbacca. The former might have gray hair but his charm and charisma were obviously untouched by the intervening years. Fans dared to hope that this was the movie they had been waiting for. A brief behind the scenes video released the summer before showed the production team favoring real sets and practical effects wherever possible. The movie was also to be shot on film, another key ingredient in keeping that authentic feeling and a visual link to the classics.

However using nostalgia alone was never going to create a satisfying cinematic experience for anyone so a new cast of heroes and villains was needed and again we got glimpses of them in the trailers which led to wild speculation over who they were and what their stories would be.

So as December 17th arrived the hype had gone beyond fever pitch in fact it was at boiling point. Midnight showings were sold out everywhere as the film broke the record for pre-ordered ticket sales.

In a breathless opening the audience is introduced to new heroes, hot shot pilot Poe Dameron and his loyal droid BB-8. The little ball shaped droid would prove to be a masterstroke of design, a tiny head with a large ball for a body he rolls through the film providing laughs and a ton of emotion. Not an easy task for something that never speaks. Far from being a poor imitation of R2-D2 this new droid proves to be just as loveable and when the two get to share some screen time it couldn’t be more wonderful. The opening sequence also introduces us to one of the big bad’s, the lighstaber wielding Kylo Ren. Clad in black and with his voice filtered by a mask he carries on the menace of Darth Vader and as we learn more about him proves to be one of the most fascinating new characters.

However the two leads are undoubtedly Finn, a Stormtrooper with a conscience who decides to defect from the First Order (who have risen up after the defeat of the Empire) and Rey, a scavenger wasting her life on a backwater planet. Thrown together the chemistry between John Boyega (Finn) and Daisy Ridely (Rey) is fantastic as they flee from the First Order in a chase sequence that starts on foot before taking to the skies in the Falcon (dumped on Rey’s planet and left as garbage). They are then propelled into space with BB-8 on board and charged with returning the little droid to the Resistance (the group carrying on the Rebels fight against tyranny). Here they encounter Han and Chewie and when you see the two veterans back on board the Falcon the hairs will be up on the back of your neck.

The First Order are desperate to track down BB-8 as the droid is carrying a map to Luke Skywalker who has been missing for years. Turns out he was training a new generation of Jedi till he was betrayed and they were all wiped out. The First Order and their Supreme Leader want the map so they can destroy Skywalker for good and prevent the rise of the new Jedi ever coming to pass.

As they travel through the galaxy we learn more about heroes old and new, Finn wants no part of the Resistance he just wants to run away as far as possible and Rey is convinced the family she has been waiting for for years on her planet will return. Han Solo has fled his marriage to Princess Leia and returned to the only thing he was ever good at, adventures in space with his best friend by his side. However larger events are in motion and all three will find themselves pulled back into the fight against evil and reunited with people form their past. To say to much more would spoil the plot (though if you are reading this you should have seen the movie by now). Suffice to say on an emotional level all of them go through arcs that are rewarding and emotional for many different reasons.

So is the film perfect? Of course not but the faults are very minor, the third acts big action set piece is a rehash of A New Hope (but done much more successfully than it was in The Phantom Menace) and one scene on board a freighter featuring some big monsters feels tacked on and echoes a similar scene in Abrams first Star Trek movie (though it allows for a cool cameo from the stars of Indonesian action classic The Raid). These are minor nitpicks though as the film is overall a complete and utter success.

As audiences walked out afterward they could say that YES! It had been done, the film had captured the old magic and bought us all a group of new characters to root for. Mysteries were solved and new questions were asked leaving us in anticipation for the release of Episode VIII.

Star Wars has had a new energy infused into it and is ready to bewitch fans with its magic be they old or new.