WARNING: THIS REVIEW CONTAINS SPOILERS FOR THE PREVIOUS ISSUES

The monthly Power Rangers comic goes from strength to strength with another outstanding issue. Last month ended on another dramatic cliffhanger but as per that issue we open here on a different scene entirely before the writer gives us a resolution. You certainly won’t begrudge this though as a fan favourite makes his return. In another little nod these opening pages are set in the Dark Dimension which long time fans will remember from the Green with Evil episodes.

The Rangers are still at a loss as to explain what has been happening to Tommy so he undergoes an examination in an anteroom of the Command Center so that they might get to the bottom of things. This may sound dull on paper but as he lays inside the scanner he shares some great dialogue with Trini. More praise to the writers here for continuing to give the most under served of Rangers on television a lot more depth. She also mentions that there are a lot more ways to help people other than being a Ranger. Infamously she was written out of the television series along with Jason and Zack being sent off to a peace conference (after the actors fell out with the producers over wages) so perhaps this is priming the reader that future issues may not focus entirely on the original team.

The beauty of comics is the ability to tell stories from any time frame they please so future issues may well see Rocky, Adam, Aisha and Kat and if so this will also mean Tommy in his guise as the White Ranger. Have fun speculating at the possibilities but now back to the review.

Rita continues her nefarious scheme to power up a mysterious crystal by using the Green Ranger powers and things really step up a gear when she reveals what the crystal will help her control. She chants out a magic spell while creating an evil instrument and her words will be familiar to Zyuranger fans.

It’s really incredible how much this comic packs into one issue. The Green and Yellow Rangers are called into battle without warning and their morphing sequence is presented brilliantly. Alpha 5 finally gets some dialogue in this issue but also meets with an unfortunate incident, poor little blighter.

While this action goes on the other Rangers discuss what they should be doing about Tommy and his weird behavior. Zack is particularly antagonistic and suspicious. It would have been tempting to give these lines to Jason (due to the Red & Green rivalry on the television series) but the Black Ranger after mentioning problems at home in a previous episode seems more troubled than ever. Kimberly is of course trying to see the best in Tommy but the writing is done so well here that you sense it’s not just because of infatuation with him but because she genuinely tries to see the best in people. It’s going to be very interesting to see how Zack’s story plays out in the next few months.

Trini is a Tolkien reader in her spare time

Once the team are all back together in the Command Center Trini reveals her findings to the group about what’s happening with Tommy’s powers but before any action can be taken the alarm sounds and an old threat returns. One which the Rangers never thought they would have to face again, another cliffhanger that will leave you desperate to find out what happens next!

After the main strip comes the next two page installment of Bulk & Skulls’ misadventures. The more comedic art style and hair brained schemes that the pair come up continue to capture perfectly the essence of the characters. 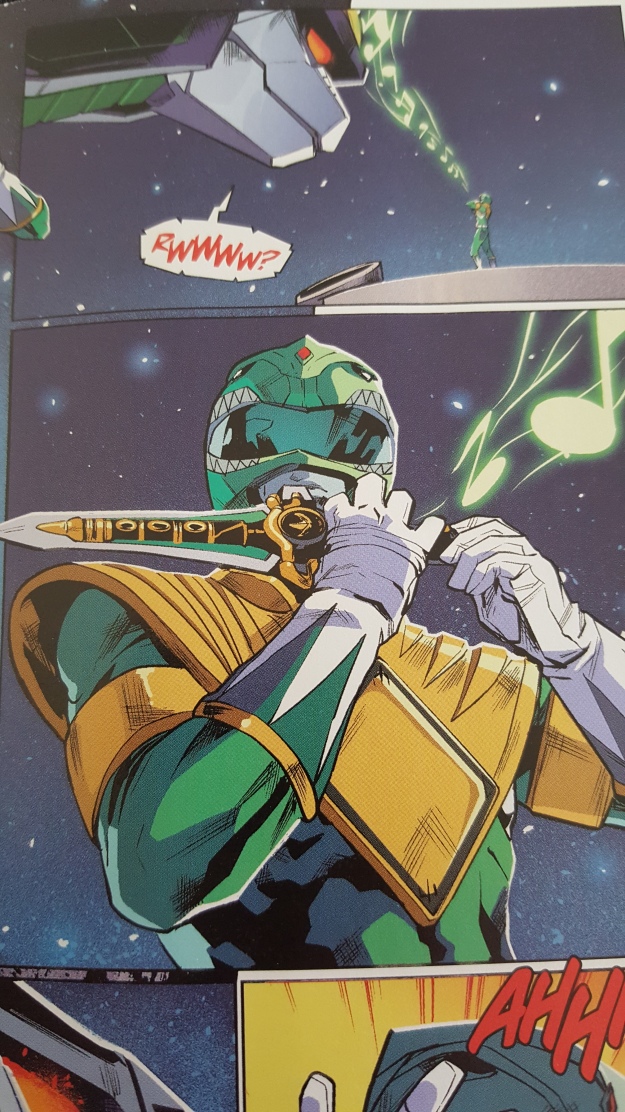 There is nothing cooler than the Dragon Dagger

Mighty Morphin Power Rangers by Boom Studios is an American comic so UK residents check your specialist comic shop to purchase a copy.