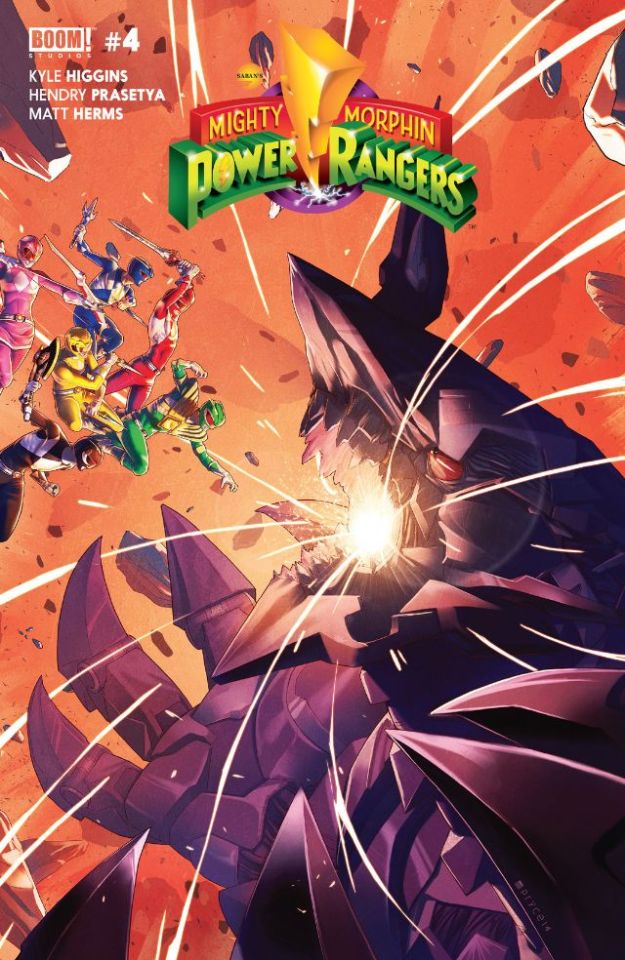 The monthly Power Rangers comic continues in thrilling fashion as writer Kyle Higgins and artist Hendry Prasetya deliver another brilliant issue. The Rangers are divided, Tommy’s hallucinations have left the others suspicious and a familiar threat is poised to destroy the city.

Rita’s mysterious plan continues to unfurl and with the Rangers sniping at each other what hope does Angel Grove have? Tommy is benched and ordered to remain in the Command Center. The five Rangers leap into action and the ensuing battle takes up a sizable chunk of this issue.

You may think this could lead to a lot of spectacle but little substance but that is not the case at all. As the Dinozords battle an old enemy we switch back to the Command Center as Tommy tries to battle his own mental demons so he can join the others without endangering them. This contrast in conflicts from the giant robot/monster mayhem to the quieter internal one is expertly handled and makes the issue a real page turner.

The artwork is fantastic, the Zord battle takes place late in the evening and partly immersed in the sea. The artist and colorist using heavy shades of dark blue and black to create a foreboding atmosphere.

The artwork and colours are of an incredibly high standard

A later hand to hand fight is really dynamic as the combatants dominate each panel they feature in so the blows they inflict on each other leap off the page. A final page cliff hanger will leave you awaiting next months issues with bated breath. This comic is a must buy for all fans.

Mighty Morphin Power Rangers by Boom Studios is an American comic so UK residents check your specialist comic shop to purchase a copy.